THOMASTON, Ga.— Brian Kemp, Georgia’s incumbent governor and a prominent fixture on former President Donald J. Trump’s enemies list, was clip-clopping around in a pair of cowboy boots in this small city on a recent morning, glad-handing his way through an adoring Republican throng at a place called Greatest Generation Memorial Park. Soon he was confronted by a smiling man wearing a baseball cap adorned with a cursive letter “A.”

It was a University of Alabama hat. Mr. Kemp, a sports nut, is a famous partisan of the University of Georgia, his alma mater and one of Alabama’s gridiron rivals. He has even adopted the Bulldog football team’s motivational catchphrase, “Keep choppin’,” as his own.

There was a brief moment of good-natured sports-guy ribbing. Then Mr. Kemp turned to his left and addressed a man with a badge. “We need to lock this guy up, sheriff,” he deadpanned. The crowd chuckled.

With his boots, his football fixation and a distinctively folksy Southern voice — one that rarely, in campaign mode, nails the “g” at the end of a gerund — Mr. Kemp presents himself as the most Georgian of Georgians. And it is his gift for both reflecting and rewarding his conservative Georgia constituency that has given him a surprisingly cushy lead in the polls in advance of Tuesday’s Republican primary, even as Mr. Trump, who remains tremendously popular in Georgia, continues to disparage him as a “Republican in name only” and demands that voters punish Mr. Kemp for declining to help him overturn the state’s presidential election results of November 2020.

What the former president wasn’t counting on, apparently, was the willingness of many Georgia Republicans to remain simultaneously loyal to both Mr. Trump and Mr. Kemp.

Just after the campaign event in Thomaston, Sheriff Dan Kilgore of Upson County identified himself as a Trump voter. But he said that Mr. Kemp seemed like a natural fit for the state. “He’s of the people,” Mr. Kilgore said. “He’s one of us.”

Linda Reeves, a retired government worker, said that she and her husband, Clarence, voted for Mr. Trump and even believed his assertion that the Georgia election was stolen, an argument that proved baseless. “We are Trump supporters,” she said. “But everything that comes out of someone’s mouth is not necessarily true.” Mr. Kemp, she said, had proven his bona fides, most recently by signing a law limiting the discussion of race in public-school classrooms, and another allowing Georgians to carry firearms without a permit.

“Brian Kemp is a very conservative governor,” she said.

While Mr. Kemp has kept socially conservative Republicans appeased with legislation, he has also strengthened his hand with important economic-development wins, including a planned Rivian electric truck plant east of Atlanta and a new Hyundai electric vehicle plant to be built outside of Savannah. The state budget he signed this month includes pay raises for teachers and state government employees. Former Vice President Mike Pence is planning to come to Georgia on Monday to campaign on Mr. Kemp’s behalf; in a statement, he called Mr. Kemp “one of the most successful conservative governors in America.”

Mr. Trump has endorsed former U.S. Senator David Perdue, the former chief executive of the Dollar General discount chain, who has repeated Mr. Trump’s falsehoods about the 2020 election. But Mr. Perdue, who lives in the exclusive community of Sea Island, has struggled to gain traction in his primary against the governor.

This week, NBC News reported that the former president has been privately complaining about Mr. Perdue’s performance and had essentially written him off. Mr. Trump pushed back Friday with a social media post calling the reporting “FALSE.”

“I am with David all the way because Brian Kemp was the WORST Governor in the Country on Election Integrity!” he wrote.

Mr. Trump has endorsed an extensive slate of Republican candidates in Georgia, where he and some of his allies are under investigation in Fulton County for potentially violating state criminal law in their attempts to interfere with the presidential election results. But the outcomes of Georgia’s Trump squad members this primary season may vary.

A recent Atlanta Journal-Constitution poll of likely Republican voters shows the U.S. Senate candidate and former University of Georgia running back Herschel Walker with a big lead in his primary race, likely aided by both Mr. Trump’s endorsement and Mr. Walker’s status as a football legend. The same poll shows the Trump-backed candidate for secretary of state, U.S. Representative Jody Hice, in a tight primary race against incumbent Brad Raffensperger.

The April AJC poll shows Mr. Kemp with a 23-point lead over Mr. Perdue; a more recent Fox News poll showed the governor ahead by more than 30 points. Mr. Perdue, whose appearances this week included a Bikers for Trump event in Plainville, Ga., is hoping that heavy early-voting turnout is a sign that Trump voters are quietly moving the needle in his direction and will at least allow him to force Mr. Kemp into a runoff.

The Kemp campaign has vastly out-raised and outspent the Perdue campaign, a sign that much of the Georgia donor class, which tends to be wary of political turbulence, prefers the status quo. And though Mr. Perdue has benefited from outside groups’ TV ads featuring Mr. Trump, the Perdue campaign has not been on the air with its own ads since late April, according to Adimpact, an ad-tracking firm.

Mr. Kemp, meanwhile, has countermanded Mr. Trump’s wrath with a relentless focus on affairs in his own backyard. On Wednesday, Norman Allen, the Upson County Commission chairman, praised Mr. Kemp for personally taking his calls in 2020 and promising extra help from state government as the county suffered in the first months of the coronavirus pandemic.

Mr. Kemp has also strategically dispensed executive spoils, including coveted government appointments, keeping fellow Georgia Republicans in his camp, or at least on the sidelines. That appeared to be the case earlier this year, when the state board that oversees Georgia’s public college system, which is stocked with Kemp loyalists, chose as system chancellor Sonny Perdue, a former Georgia governor and Trump cabinet official who happens to be David Perdue’s cousin.

Before his stump speech in Thomaston, Mr. Kemp mingled with the crowd, with the sleeves of his red-gingham shirt rolled up, shaking hands with old acquaintances, talking about tailgate parties from football seasons past and praising the moxie of his octogenarian mother.

Mr. Kemp is aware that this kind of warm welcome, from a rural, mostly white crowd, coexists with a strong distaste for him on the left and from influential voices outside of Georgia. In 2018, a number of high-profile Democrats described some moves he made as secretary of state as voter suppression tactics. Some of them used variations of the word “steal” to describe Mr. Kemp’s defeat of the Democrat Stacey Abrams that year in the governor’s race. Ms. Abrams, who also alleged that Mr. Kemp engaged in voter suppression, never conceded in that contest.

His four years in office have brought more controversy. President Biden described the sweeping law that Mr. Kemp signed in the wake of the 2020 election to restrict voting access “Jim Crow in the 21st century.” And Mr. Kemp was heavily criticized for his decision, in April 2020, to allow many businesses in the state to reopen in the early stages of the coronavirus pandemic.

In his speech in Thomaston, Mr. Kemp said he knew those criticisms were wrong, because he had listened to voters. “I knew how bad they were hurting, because I was hearing from them,” he said of Georgia business owners and workers affected by the pandemic. “I was talking to them. I was talking to barbers and the cosmetologists and the waitresses and the restaurant owners.”

The governor made no mention of David Perdue, or of Mr. Trump, but rather looked ahead, with multiple mentions of Ms. Abrams, whom he will face off against in the general election if he gets there. “We’re in a fight for the soul of our state, y’all,” he said. “We’re getting up every single morning to make sure that Stacey Abrams is not going to be our governor or our next president,” he said.

He added: “Keep choppin’, God bless you, and thanks for coming.”

John Fetterman ‘has no work restrictions’ as he recovers from stroke, PA Senate hopeful’s doctor says 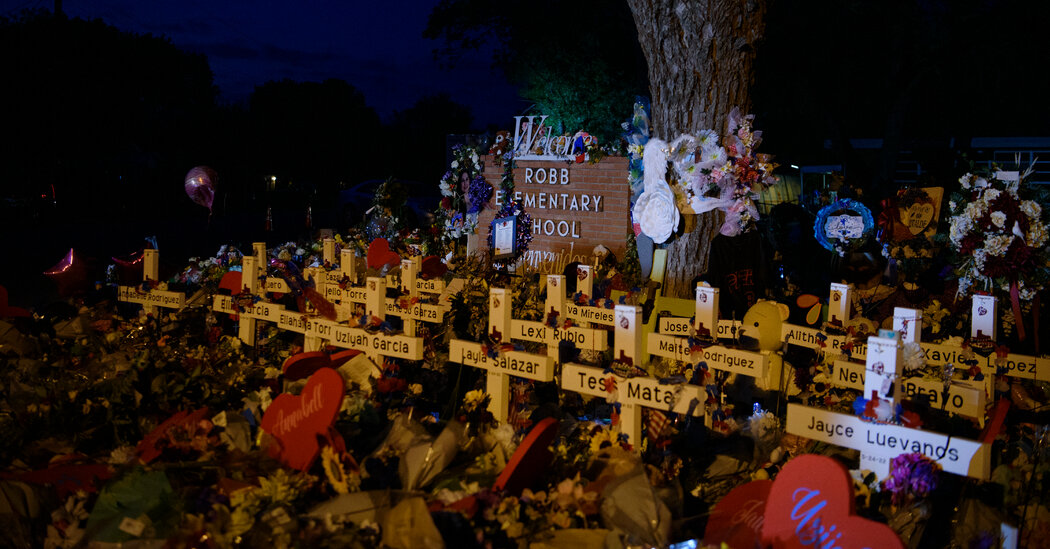 Sam Bankman-Fried could face years in prison over FTX’s $32 billion meltdown — if the U.S. ever gets around to arresting him