WASHINGTON — Defense Secretary Lloyd J. Austin III has recommended that the White House promote Lt. Gen. Michael E. Langley of the Marine Corps to be the next head of the military’s Africa Command, two U.S. officials said, in what would be a pathbreaking assignment.

If formally nominated by the White House and confirmed by the Senate, General Langley would become the first Black four-star Marine Corps officer. He would succeed Gen. Stephen J. Townsend of the Army, who is retiring this summer, said the officials, who spoke on the condition of anonymity to discuss personnel issues.

General Langley, who oversees Marine forces on the East Coast, has commanded at every level from platoon to regiment during his 37-year career and served overseas in Afghanistan, Somalia and Okinawa. He also has had several senior staff jobs at the Pentagon and at the military’s Central Command, which oversees operations in the Middle East.

The Marine Corps has never had anyone other than a white man in its most senior leadership, four-star posts.

Since the Marines first admitted African American troops in 1942, the last military service to do so, fewer than 30 have obtained the rank of general in any form. Not one has made it to the top four-star rank, an honor the Marines have bestowed on 73 white men. Seven African Americans reached lieutenant general, or three stars. The rest have received one or two stars, the majority in areas from which the Marine Corps does not choose its senior leadership, like logistics, aviation and transport.

After an August 2020 New York Times article about the dearth of Black Marine generals, the Marine Corps commandant, Gen. David Berger, was asked why the corps had not promoted an African American to its top ranks in its entire 246-year history. “The reality of it is: Everybody is really, really, really good,” General Berger said in an interview with Defense One. “For every 10 we pick, every 12, we could pick 30 more — every bit as good.”

General Langley is “aware of the weight of this promotion,” said retired Lt. Gen. Ronald L. Bailey, the first Black man to command the First Marine Division, from 2011 to 2013. “I’ve known him since he was a first lieutenant. I know how bright he is, and he knows what this means.”

The promotion, General Bailey said, “is bigger than Langley. This is for our nation. It’s been a glass ceiling for years, and now Black Marines will see that this is possible.”

When he received his first star, General Langley’s friends recalled that he told a story of how his father resigned his post in the Air Force after it refused to allow him to remain in Texas to care for his children after their mother died.

General Langley grew up and entered the Marine Corps, where he was an artillery officer.

He would take charge at the command’s headquarters in Stuttgart, Germany, at a time of rising economic and security competition from China and Russia in Africa and as waves of terrorism and violence have seized the Sahel region, a vast sub-Saharan scrubland that stretches from Senegal to Sudan.

Other seismic changes are jolting the region. In a reflection of economic insecurity and poor governance, military leaders in the past two years have toppled the governments of Mali, Chad, Guinea, Sudan and Burkina Faso.

In Mali, France announced earlier this year that it was ending its counterterrorism operation amid souring relations with the Malian military leaders who seized power in a coup last May.

Western officials say Malian security forces have since hired Russian mercenaries with the Wagner Group, a private military company that also operates in Libya and the Central African Republic.

In East Africa, General Langley would oversee a shifting mission. President Biden has authorized the U.S. military to once again deploy hundreds of Special Operations forces inside Somalia — largely reversing President Donald J. Trump’s decision to withdraw nearly all 700 ground troops who had been stationed there.

Mr. Biden also has approved a Pentagon request for standing authority to target about a dozen people suspected to be leaders of Al Shabab, the Somali terrorist group that is affiliated with Al Qaeda, three U.S. officials said. Since Mr. Biden took office, airstrikes have largely been limited to those meant to defend partner forces facing an immediate threat.

Together, the decisions by Mr. Biden will revive an open-ended American counterterrorism operation that has amounted to a slow-burn war through three administrations. The move stands in contrast to his decision last year to pull American forces from Afghanistan, saying that “it is time to end the forever war.”

A native of Shreveport, La., General Langley graduated from the University of Texas at Arlington and was commissioned in 1985.

“Intelligent and thoughtful,” said Gen. Kenneth F. McKenzie Jr., a recently retired four-star Marine for whom General Langley worked at the Central Command. “Importantly, he was never shy about speaking up if he saw something that needed to be fixed — not afraid to take an unpopular position.” 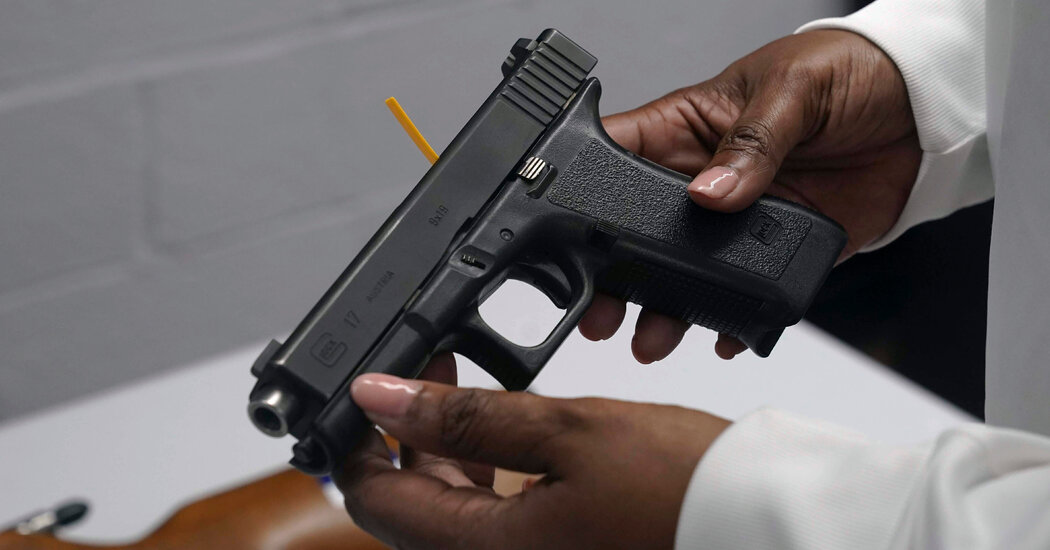 The New York gun law struck down on Thursday is still in force — for now.