ATLANTA — Early voting turnout in Georgia’s primary elections surged past previous milestones, signaling an energized electorate in a newly minted political battleground that remains ground zero in the national fight over voting rights, and setting off a fresh debate over a major voting law that had largely been untested before this year.

Republicans quickly pointed to the early totals — more than 857,000 ballots were cast in an early voting period that ended Friday, roughly three times as many as in the same period in the 2018 primary elections — to argue that the law, passed last year by the G.O.P.-led legislature, was not suppressing votes.

Democrats and voting rights groups said that the numbers were evidence that their redoubled efforts to overcome the law’s effects by guiding voters through new rules and restrictions were paying off so far, and that any focus on total turnout ignored whether voting had been made harder or had placed new burdens on marginalized groups.

It is too soon to draw any sweeping conclusions, because the true impact of the voting law cannot be drawn from topline early voting data alone. The picture will grow slightly clearer on Tuesday, when Election Day turnout can be observed; clearer still in the days afterward, when final absentee ballot rejection rates and precinct-level data will emerge; and will fully come into focus after the November general election, when turnout will be far higher and put more strain on the system.

The early aggregate statewide turnout figures could obscure the effects of the new law on specific groups, like Black voters, that advocates contend were targeted by it.

Ultimately, election experts cautioned, it remains unclear if the law made voting harder, if Democrats have been energized by the legislation or if some combination of the two is unfolding.

The top election official in the state, Brad Raffensperger, a Republican running for re-election, underlined his confidence in the state’s elections under the new law, adding that he was sure county elections administrators would be adequately prepared for what will most likely be a steep increase in voter participation on Election Day.

“It’s been tested and it’s coming through with straight A’s,” he said in a recent interview. “We’re having record turnout. We have record registrations, and lines have been short. Everything’s really been running very smooth.”

Georgia was one of the first states to pass a new voting law after the 2020 election, when former President Donald J. Trump targeted the state with a flurry of falsehoods about its results.

Republicans in the legislature passed the voting law to address what they argued were widespread problems with election oversight and expanded ballot access that could create openings for voter fraud. (Multiple recounts and audits after the election found no evidence of meaningful fraud or other wrongdoing.) Other states soon followed: At least 19 passed 34 laws last year that included new restrictions on voting or changed the way elections are administered.

Democrats, civil rights groups, businesses and voting rights organizations denounced the Georgia law. President Biden called it “Jim Crow 2.0,” and Major League Baseball moved its All-Star game out of Atlanta in protest. But some of the public outcry focused on provisions that ended up being removed from the final version, such as banning voting on Sundays (the law allows counties the option of providing Sunday voting, and added a second mandatory Saturday of early voting).

In this week’s primary, there are no major statewide battles for a Democratic nomination, with Stacey Abrams running largely uncontested for governor and Senator Raphael Warnock running as an incumbent for re-election.

The law instituted new regulations for mail voting, such as additional identification requirements and limits on how drop boxes could be deployed (though the law did officially codify drop boxes as an option), but turnout for absentee voting has been difficult to parse so far.

Voters in primaries also tend to be more motivated and engaged than general-election voters, and they are more likely to be aware of new rules and willing to work through them to cast ballots.

Gov. Brian Kemp, campaigning in the final days of his Republican primary race for governor, condemned Democrats for their criticism of the law, suggesting that their claims that it was “suppressive” were hyperbolic and politically motivated.

Why are voting rights an issue now? In 2020, as a result of the pandemic, millions embraced voting early in person or by mail, especially among Democrats. Spurred on by Donald Trump’s false claims about mail ballots in hopes of overturning the election, the G.O.P. has pursued a host of new voting restrictions.

Why are these legislative efforts important? The Republican push to tighten voting rules has fueled doubts about the integrity of the democratic process in the U.S. Many of the restrictions are likely to affect voters of color disproportionately.

Which states have changed their voting laws? Nineteen states passed 34 laws restricting voting in 2021. Some of the most significant legislation was enacted in battleground states like Texas, Georgia and Florida. Republican lawmakers are planning a new wave of election laws in 2022.

Will these new laws swing elections? Maybe. Maybe not. Some laws will make voting more difficult for certain groups, cause confusion or create longer wait times at polling places. But the new restrictions could backfire on Republicans, especially in rural areas that once preferred to vote by mail.

Mr. Kemp and other Georgia Republicans have often brushed aside Democratic criticisms of the new law, noting that some provisions in fact allow greater voting access than in some blue states. Georgia’s new law requires a minimum of 17 days of early voting, with a county-level option for two more days through Sunday voting. New York and New Jersey, by contrast, offer nine days of early voting.

But for the organizers who pushed to mobilize voters in 2020 and are continuing to try to expand Georgia’s electorate, that work will be made only more difficult under the new law.

On Sunday, in a memo of takeaways about the primary takeaways, Ms. Abrams’s campaign manager, Lauren Groh-Wargo, criticized Republicans’ celebration of high turnout in the face of the new law, saying their “narratives are false, illogical and self-serving.”

“Modern-day voter suppression and voter turnout are not correlated,” the memo reads.

Aklima Khondoker, the chief legal officer for the voting rights group the New Georgia Project, said she anticipated an increase in voter confusion in November. She called the suggestion that high turnout negated the law’s restrictions a “gross mischaracterization.”

“Organizers have increased turnout across the state of Georgia because of their hard work,” Ms. Khondoker said.

There are other signs of the law in practice. A voter in Forsyth County challenged the eligibility of more than 13,000 other voters in early May, a move made possible by a provision of the legislation.

The New Georgia Project has knocked on nearly 500,000 doors, made more than 110,000 phone calls and sent more than 166,000 text messages to voters in the months leading up to May’s primary election, according to the organization’s spokesman, Paul Glaze. It has also disseminated mailers and run print advertisements in Black newspapers. The message: Turn out to vote.

In the more than 500 African Methodist Episcopal churches across the state, pastors and local faith leaders have encouraged voters to cast ballots early and in person as a way to mitigate any potential effects of the new law. Church leaders have also created a weekly voting rights message that local preachers can work into their Sunday sermons.

“This turnout is not because of S.B. 202, but in spite of S.B. 202,” said Bishop Reginald T. Jackson, who leads the A.M.E. churches in Georgia, referring to the bill’s name in the legislature. He said his parishioners were “furious” at how Republicans in the state had justified the law in part by making claims of voter fraud that were later debunked in areas with large Black populations. “African Americans are resilient. You make up your mind there’s something we can’t do, we become more determined to demonstrate that we can do it.”

Wealthy customers will help Apple resist the effects of inflation 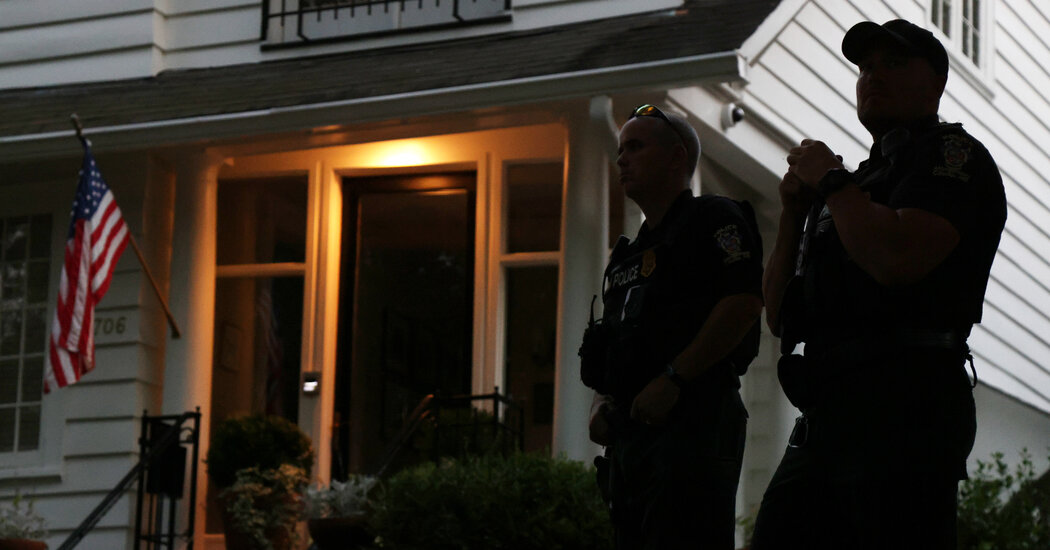 Armed Man Is Arrested Near Home of Justice Kavanaugh