Again, what is most impressive about Republicanism’s new (ongoing) Dear Leader is that the man manages to be a terrible human being in not just most circumstances, but every circumstance. He is the worst person you have ever met, even if you have never met him. There is no “but he likes puppies” or “but he’s good to his family” or “but at least he pays his son’s Boy Scout $7 membership fee out of his own pocket, rather than ripping off a charity to do it.” There’s nothing. Ever.

All of that is a long-winded introduction to the unfortunate news that Dear Asshole Probably The Actual Antichrist Leader may have gotten his electoral butt handed to him after killing off a half million Americans through bored and delusional incompetence, but he is determined to remain relevant. This requires subjecting his subjects to his momentary thoughts on all possible subjects. So how’s that been going? Not well.

After being permanently banned from Twitter for stoking violent insurrection through provably false hoaxes, and after Facebook begrudgingly and spinelessly decided they would kick a permanent decision on hosting the American fascist leader’s violent musings down the road for another half-year—all part of a wider techwide reexamination of priorities in the wake of Trump provoking actual sedition rather than admit an election loss—Trump recently announced he would be forming his own social media platform, one with blackjack, and hoo—I mean, one consisting solely of his own word-burps, the all-important buttons allowing you to express appreciation for his word-burps, and not much else.

Yes, it’s the Donald Trump future, and the future consists of a Myspace universe in which Donald Trump is the sole inhabitant, screaming at himself, forever.

Some metrics on Trump’s new site are in, and the evidence suggests that Twitter and Facebook and PornHubButForFurries and DogsThatLookLikeChurchill have not a damn thing to worry about when it comes to being supplanted by Typhoid Hitler’s Daily Grievance. In the first week the blog “has attracted a little over 212,000 engagements” total “across Facebook, Twitter, Pinterest and Reddit,” reports NBC News. Compare that with Trump’s previous 88 million followers on just Twitter alone, and you can see that only the most diehard members of Dear Ex-Leader’s fascist base are tuning in to hear his thoughts on whether a racehorse is a “junky” or whether Marco Rubio’s key-jingling was entertaining enough to calm restless Leader’s nerves.

The rest of America don’t care. They may have cared enough to bleat approvingly when Donald insulted Ted Cruz or an equally important horse back on Twitter, but it was just one post flitting by in an endlessly spinning maelstrom of similar tacky crap. It’s not important enough to them to go seek it out.

Mind you, somebody probably billed Trump an absolute fortune to set up an internet web page in which Trump could post Twitter-like thoughts even after Twitter could no longer stomach him. Trump’s never going to pay that person, mind you, but at least in theory you’re looking at, what, a quarter million dollars’ worth of greasy supplication?

All of this suggests that the absolute drop-dead certainty of party doom among Republican leaders and lawmakers if any one among them pulls a Cheney and refuses to go along with Trump’s ranting, delusional insistence that he won his last election no matter how many times officials actually in charge of those elections confidently state he didn’t, is … overstated? At best? Trump and the people whose own careers depend on Trump’s favor are quite loud in warning lawmakers that “the American people” won’t stand for Republicans who don’t stand by Trump’s every seditionist burp and rant, but the actual American people seem to be moving the f–k on and then some.

You there, reading these words: You’re probably mad I’m even bringing him up. You were existing perfectly fine without knowing what Dear Eclipse-Looking Guy’s website metrics currently looked like and resent having it wedged into your brain when you could be thinking about other things, things like deciding what your next meal will be or wondering whether Ted Cruz or Rand Paul would win in a fight if the weapons were soggy slices of ham and the reward was just one particularly gullible elderly man’s email address. But you’re reading anyway, because in your heart of hearts you know that the only way you can think about lunchmeat battles in the first place is if other people are begrudgingly keeping an eye on Typhoid Hitler’s whereabouts to make sure he doesn’t scuttle back to Munich with a new book to sell. Nobody wants to hear about Seditionist Treasonbag. It’s just a thing we have to put up with.

As of the current moment, then, we can report that the vast majority of America appears to give about as much of a shit about Donald Trump as you do. Even among once-supporters, few people are actually seeking him out. This is how politics generally goes after losing an election, or even after retiring in victory. Nobody in the Republican base or leadership is spending even a moment of their day wondering what George W. Bush is currently doing. Is former House Speaker Paul Ryan even still alive? Do we know? Can we prove it? Eh.

Trump is attempting to buck that trend because Trump is a malignant narcissist. He is someone who might literally wither away without his demanded praise and attention; he cannot stomach it. Like Tinkerbell, he must receive constant attention or he will die. So, not quite like Tinkerbell, he is crashing weddings, cheating at golf, opining about the drug habits of sport horses, and making sure that every Republican lawmaker he ever so much as made eye contact with still knows that if they do not shine his shoes in every televised interview and public statement, he will personally devote himself to dragging them into the pits of primary hell. Him and his 200,000 “likes,” that is.

The Republican base is moving on, at least so far. They have other heroes, heroes like neo-Nazi talking point machine Tucker Carlson and child sex trafficker Matt Gaetz. Heroes who are still allowed to advocate for crimes on Twitter. The party will not moderate—each of the new would-be heroes are just as hooked into white nationalism, sex crimes, corrupt acts, and “owning the libs” as the Trump clan itself, but it’s not a certainty that Trump can retain his position as the party’s top fascist dog.

He may yet succumb to the worst of all reality show endings: an audience that has gotten too bored to continue paying attention. Wouldn’t that be nice. 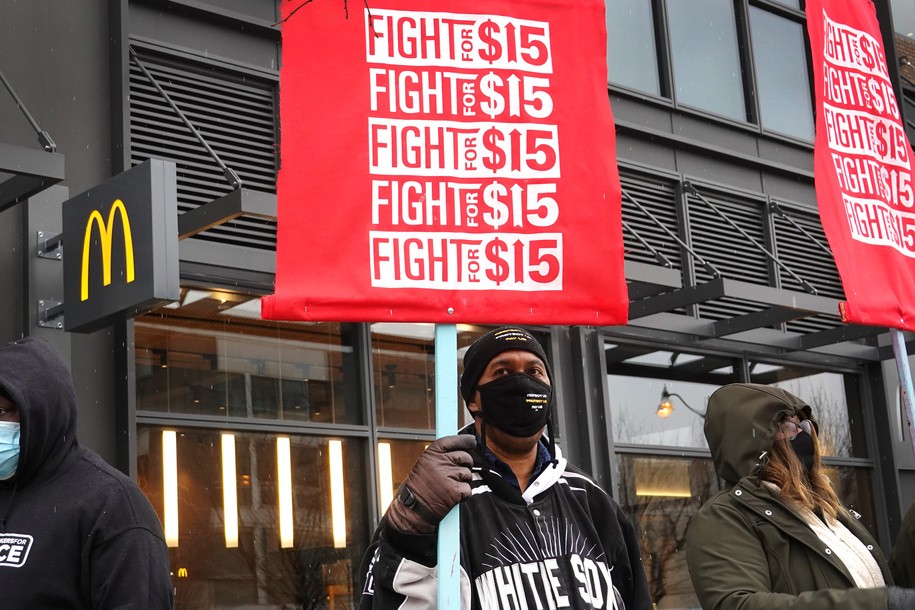 26 million workers have gotten a raise thanks to the Fight for $15, this week in the war on workers 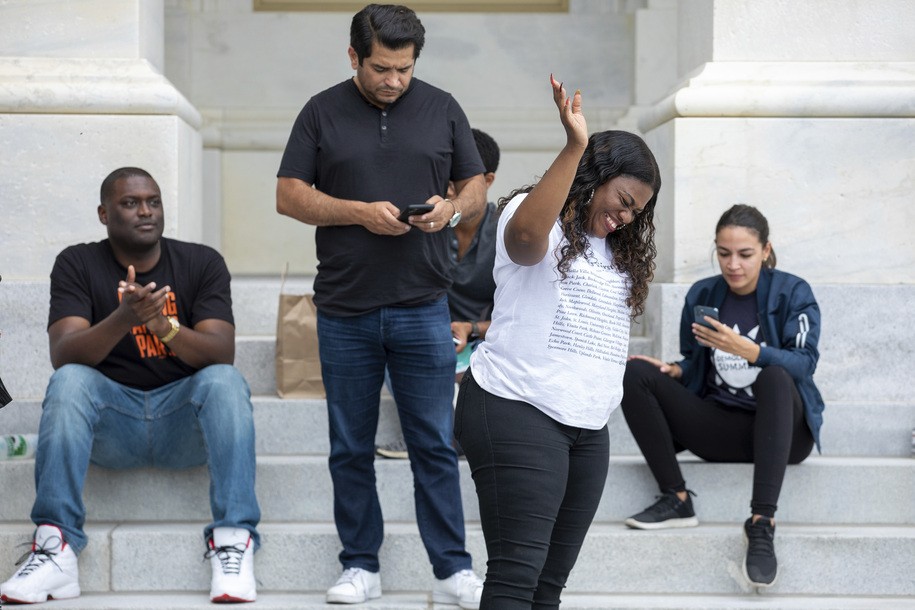 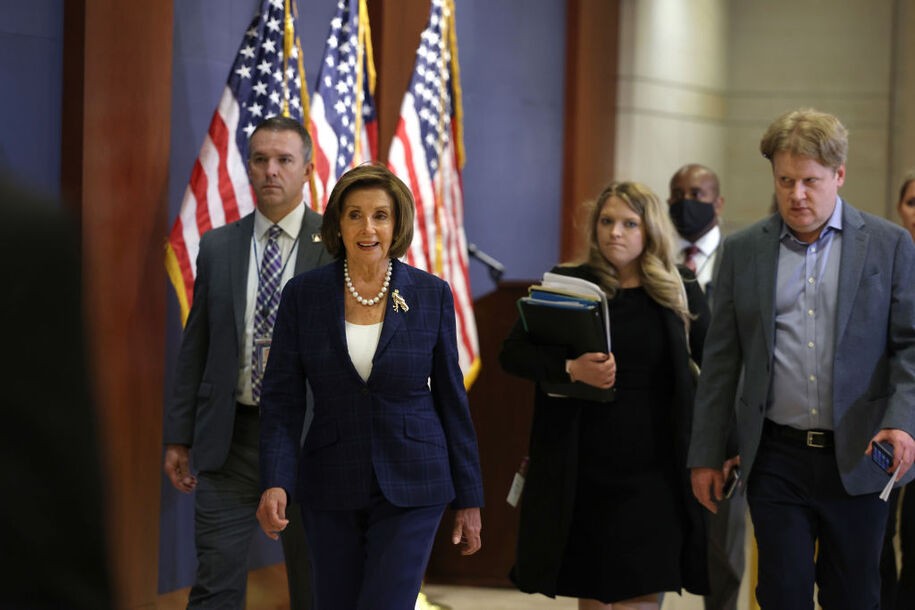 Pelosi inexplicably dithers over Jan. 6 committee, wants to give McConnell shot at burying it 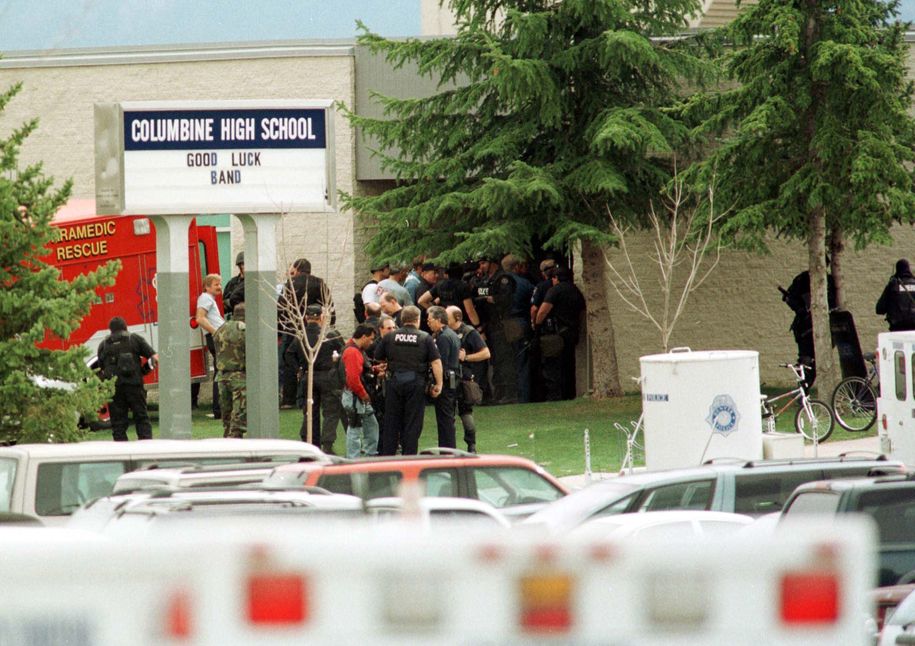