Herschel Walker, the former football star leading the race for the Republican nomination for a Georgia Senate seat, said that a ban on abortion should have no exceptions — presumably even for rape, incest or the health of the mother.

Asked Wednesday if he wanted a more total ban on abortion than the six-week prohibition passed by the Republican-controlled state legislature, Mr. Walker was unequivocal.

“There’s no exception in my mind,” he told reporters after a campaign speech in Macon, Ga., at the Georgia Sports Hall of Fame. “Like I say, I believe in life. I believe in life.” He did not single out exceptions for rape, incest or the life of the mother specifically, but he said repeatedly that he wanted no exceptions.

Mr. Walker, a political newcomer who returned to the state where he won the Heisman Trophy in 1982 to run at the encouragement of former President Donald J. Trump, called for more money to promote adoption and to support single fathers and single mothers.

“You never know what a child is going to become,” Mr. Walker said. “And I’ve seen some people, they’ve had some tough times, but I always said, ‘No matter what, tough times make tough people.’”

Georgia is among several states that have passed stringent abortion restrictions that currently could not pass constitutional muster, but would take effect if the Supreme Court, as expected, overturns Roe v. Wade, the landmark case that legalized abortion in the United States. Georgia’s law, signed by Gov. Brian Kemp in 2019, would ban abortion around six weeks, with exceptions for pregnancies that cannot come to term, that resulted from rape or incest or that must be ended because of a medical emergency.

If elected, Mr. Walker would have no control over state-level abortion policy as a senator. But a Republican majority in Congress might find itself under pressure to pass national restrictions that could affect Democratic states. His Democratic opponent this November, Senator Raphael Warnock, favors abortion rights. 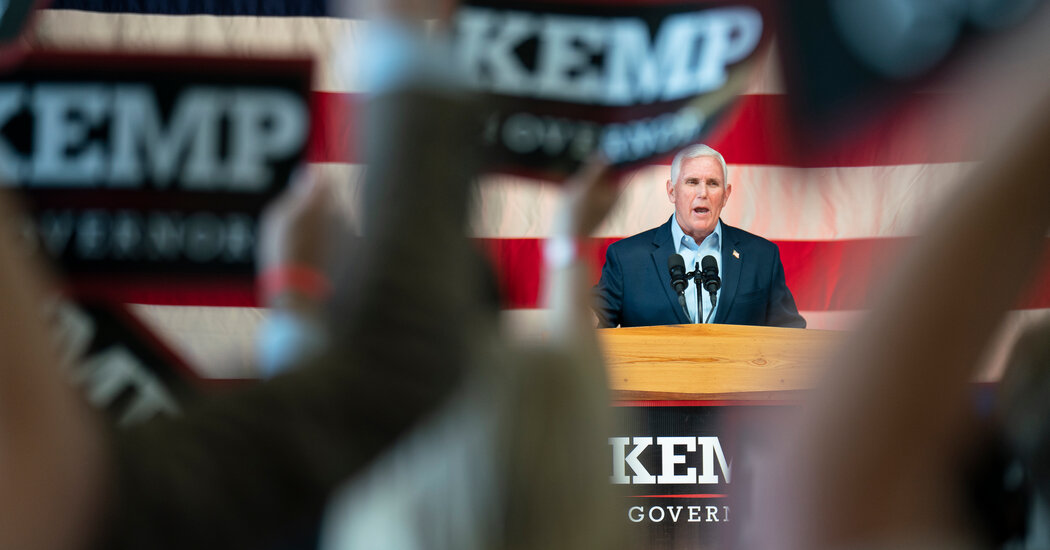 Pence rallies alongside Kemp on eve of Georgia’s G.O.P. primary for governor.

Biden touts law enforcement plan while questioning ‘MAGA’ Republicans: ‘Which side are you on?’